In case you're interested, I've posted a review of my Taifun trailer here:

As some of you may know, I ordered a fiberglass trailer made by Novosport in Germany called the Taifun, based on the Dutch Radical Design Cyclone trailer. That is to say, the Taifun is a Cyclone trailer frame, minus the Radical Design canvas bag, plus the Novosport-made lightweight fiberglass trunk. The nice thing is, everything apart from the trunk is compatible with the Cyclone, which is a great trailer in its own right. So you get a quality frame with a quality trunk on top of it. 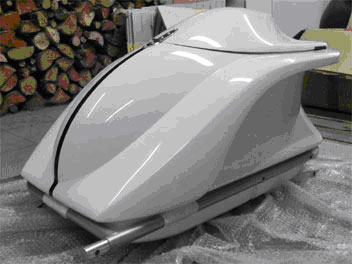 Let's get something out of the way: quality doesn't come cheap. There's no secret. The Cyclone trailer is expensive, and the Taifun even more so. But you get what you pay for: a trailer that's meant to perform well for many years. At least that's the hope. 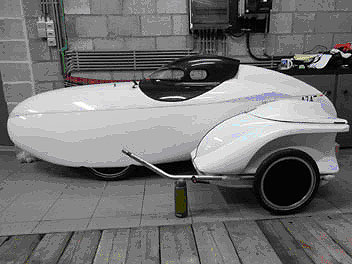 Novosport offers two trailers: the Taifun 1, which has a more aerodynamic shape but a lower storage capacity, and the Taifun 2 which contains more stuff but is boxier. I found the Taifun 1 cavernous enough for my needs, and I care about speed obviously, so I chose it over the Taifun 2.

Today I went see the friendly owner of Novosport at his home in Germany (on a Sunday, thanks Ulrich!) and took delivery of my trailer. It took 3 months to arrive, but that's because I ordered it with a custom white color to match my Quest's, namely RAL 9010, aka the "Velomobiel.nl white". The trailer's color matches almost perfectly, although my Quest's finish has yellowed a bit with age.

Back home, I assembled the trailer and mated it to the velo. As I expected, the trailer doesn't quite track centered. It's about an inch to the left compared to the centerline of the velo. That's because the Velomobiel.nl hitch, being bolted to the tail of the Quest, is too far out compared to a normal Radical Design hitch attached to a 135 mm rear bicycle frame. No biggie, tomorrow I'll heat up the tow bar with a brazing torch and correct its angle to center the trailer. Also as I expected, the trailer is about impossible to back up: the Quest maneuvers like a pig and turns too wide to correct any jackknifing. Anybody who's ever backed up a semi knows the tighter the tractor turns, the more jackknifing angle you can recover. The Quest definitely ain't it

Additionally, It doesn't take much jackknifing to the right for the towbar to hit the shell. I'll just have to be careful if I do have to back up, and/or install a jackknife alarm of some sort on the tow bar.

Eventually I'll need to install slave brake lights and turn signals on the trailer. The Quest's tail lights are hidden by the trailer and aren't too visible from a distance, especially from car in which the driver sits low.